The most important step in preparing for a deposition is a full-blown cross examination dress rehearsal—minus opposing counsel, of course. After I’ve coached my client on all the do’s and don’ts of depositions (click here to see previous Executive Deposition Tips), it’s time to bring in a videographer and see if my client has absorbed all my guidance. Deposition training, as it turns out, is not a spectator sport. 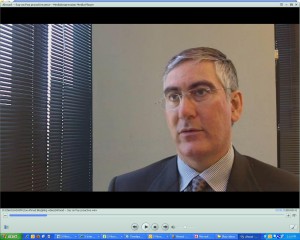 What am I looking for? Among other things, whether my client listens to and understands the question and whether he or she falls for ambiguities or false premises. A lot of lawyers will lead up a question with a false premise before they go on to the question, and the witness needs to be on his toes and point out that the premise of the question is false. But you have to practice that.

I also want to make sure the executive understands the theory of our case and can articulate the evidence we have to support our position. Depending on the circumstances, saying “I don’t know” can be just the answer the other side is looking for.

The videographer is a crucial part of this exercise, even if it makes the client uncomfortable. After all, there’s going to be a videographer in the real deposition, so it’s better to get used to it before game time. The real reason to videotape the mock cross examination, though, is that most people don’t realize how they appear on camera. Are they sitting up straight? Does their striped tie look like a test pattern? Is the executive’s hairstyle distracting?

It’s vitally important that executives watch themselves on video before the real deposition in order to correct what may very well be cosmetic impediments that can nevertheless prejudice a jury.

Finally, I like to reverse roles with my clients and let them be the opposing lawyer and I’ll be the executive. I want my clients to have a chance to pose their own false premises and inject their own ambiguities and see how I correct them. This exercise is good on many levels and makes tangible and concrete what had previously been a fairly intangible and amorphous concept.

Depositions are difficult and, more often than not, at least a little unpleasant. But the better prepared an executive is before heading into one, the more likely she is to come off as trustworthy, honest and sincere.