Leaving But Not Yet Gone: Notes from the ABA’s Labor & Employment Midwinter Meeting

One of the perennial issues executive employment lawyers handle is what to do when an executive has accepted a job offer at a competitor but hasn’t left his or her current employer yet. As I found out last weekend when I spoke on a panel titled “Non-Compete Purgatory: Leaving But Not Yet Gone” (at the ABA Section of Labor and Employment Law’s Midwinter Meeting), it’s a sticky situation that lawyers such as myself had no trouble filling up an hour-plus discussing and debating. 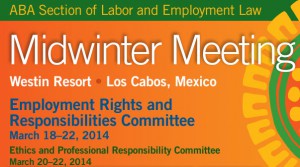 Most executives – and their lawyers – are understandably focused on preventing a lawsuit from being filed in the first place. So the consensus in the room was that honesty and transparency is always the best policy, even if that opens up the possibility of our client being escorted out of the building upon giving two-weeks’ notice.

Any employee’s first duty is to his or her current employer, even on the last day of employment. That means not actively competing with a current employer, either for employees or customers. Likewise, confidential information must be handled with particular sensitivity so as to avoid even the appearance of misappropriation.

So what is “actively competing”? In general, it’s anytime an employee solicits customers or co-workers while still employed, deceives or harms the employer, and/or takes an active role in the operations of the future employer.

Not surprisingly, there’s a lot of gray area there. Is sending an email to colleagues and customers saying that you’re leaving “soliciting” them to come to your new company? Generally not, but it depends on how the email is worded. When does omission (i.e. not telling your employer you’re looking, you’ve received an offer, or you’ve accepted an offer) become deception? Again generally, it’s not, but it depends.

There are certain actions that clearly cross the line, such as telling customers that the executive can get the customer a better price at the executive’s future job or setting up job interviews at the future employer for employees at the executive’s current company. And, believe it or not, there are cases in which those exact actions have occurred.

But most departing executives truly have their current employer’s best interests at heart and don’t want to burn any bridges (or end up in court). And when that’s the case, I have found that transparency and honesty are the best way to stay out of trouble. That means working with the current employer in an open and forthcoming way to make sure that the company’s confidential information stays confidential, working to ensure a smooth transition to whomever is taking over the executive’s current duties, and generally complying with the executive’s duty of loyalty to his or her current employer.

Moving to a new job is exciting and challenging. But when mishandled, it can also be an opportunity for litigation.

So it’s important to review your employment contract, your employee handbook and any other relevant documents, including, if you signed one, a covenant not to compete. It’s also smart to review those documents with your executive employment lawyer as well, to make sure there aren’t any landmines invisible to the naked eye.

SIDENOTE: I am the new co-chair for the ABA Section of Labor and Employment Law’s Subcommittee on Covenants Not to Compete, so I’m sure we’ll be revisiting this topic quite a bit in the future.

This entry was posted in Complaints Against Executives, Executive contracts, Litigation, Non-Competes and tagged American Bar Association, Section of Labor and Employment Law. Bookmark the permalink.