NFL mediation not what you may be thinking

The NFL owners and players union head back into mediation tomorrow (Tuesday March 1), less than 72 hours before the collective bargaining agreement expires. Drastic measures could follow.

Mediation is a good first step, and it’s swell that the mediator said there was some progress last week. But by itself mediation can mean very little.  Many people confuse mediation with arbitration, but the two are very different. 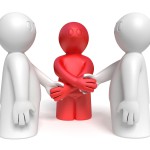 Arbitration is binding and it’s a lot more like going to court than mediation. Mediation is a non-binding meeting to attempt to resolve a dispute using a third party neutral. It is usually voluntary, in the sense that both sides have to agree that they want to go to a mediator. It is non-binding because the mediator usually has no authority whatsoever to “decide” what the resolution will be. The mediator is not a judge or jury.  The mediator, who is usually a lawyer, is a neutral party and doesn’t represent either side and doesn’t have an interest in the matter. The mediator attempts to facilitate a settlement by convincing the parties to make concessions until a resolution is reached. But ultimately both parties have to agree on the resolution. Obviously, some mediators are better than others, and usually mediators are judged on their ability to get the parties to reach a resolution. Since the mediator only has the power of persuasion to work with, it helps to have a mediator who has the trust of both sides.

Like these team owners, many executives will find themselves in mediation at some point, whether it is on behalf of the company they work for or individually.  These days, cases are increasingly resolved by mediation or arbitration rather than in court. This is especially true of cases involving executives.  Frequently, the executive is better off “taking control” of the resolution process by mediating rather than letting a stranger (the judge) or 6-to-12 strangers (the jury) resolve it for them.  Executive employment agreements often contain mediation clauses in addition to arbitration clauses anyway. A plus is, depending on how quickly you get to mediation, it can greatly shortcut the process.

There is a cost to mediation.  Mediators – at least those outside of the government – charge for their services. Usually that charge is split between the parties evenly. And the lawyers for each of the parties charge for their time as well. But if the case settles, obviously, mediation can be well worth the cost.

Texas and Florida were at the forefront of mediation.  The Texas legislature passed a comprehensive dispute resolution statute in 1987, and the mediation rush was on.  Shortly thereafter, most cases in Texas went through mediation before going to trial.  As a result, many of us have participated in numerous mediations. I have probably taken part in and learned from more than 200 mediations.

I’ve concluded that other than the time and mediator fees, there really is no downside to mediation. Sometimes, parties refuse to attend mediation because they think it will send a message of weakness, but that is rarely true, and can be easily remedied at the mediation. Other times, parties go with great hopes and come out having to still go to court or arbitration. Even when a deal is not reached, one usually gets the benefit of hearing the other side’s perspective. That can lay the foundation for a settlement later, and it can help both sides crystallize the issues in litigation.

It is unlikely we will learn much about what is going on in the ongoing NFL negotiations because confidentiality is a key hallmark of mediation.  In Texas, the 1987 statute mandated that statements made in a mediation are confidential.

The typical procedure for mediation, at least for cases in litigation, is for both sides to submit a written memorandum to the mediator explaining their perspective on the case.  It contains whatever that party wants to provide to the mediator, but it is typically confidential in that it is not shared with anyone else, such as the other side.  Most mediations take place during one full day, but some can be scheduled for a half day, and in particularly complicated cases (such as the NFL dispute), can go on for days.

On the day of mediation, usually both sides start by meeting with the mediator around a conference room table.  This is sometimes referred to as the “opening session.”  At this stage, the mediator usually makes a short opening statement, explaining the mediation process and rules (which are few).  Then each side makes an opening statement, which is usually done by the lawyers, but the clients can speak too, if they wish or if it is deemed beneficial.  In some cases, the ill will between the parties is so great that there is no opening session between the parties, or if there is, only the attorneys are present.  Many family court mediations, for example, are done this way for obvious reasons.

After the opening session, the parties will separate into different rooms, and the mediator goes back and forth between the rooms. These are called the private caucuses.  In these sessions, the mediator often plays the role of devil’s advocate, seeking concessions from both sides. The goal is to get the positions to come closer and closer together until they eventually meet at some point where a deal can be reached. And no, a deal is not always reached in the precise middle of the original positions.  If that were the case, then one could always reach a better deal by starting out at a more unreasonable position than the other side. Usually this does not work.  In a mediation, the positions are typically whittled down to what the parties really need, and that can be far from where they originally started.  If the parties reach a deal at mediation, they usually sign an agreement outlining the essential terms, and execute more formal (and lengthy) settlement documents later, although on occasion the parties can sign prepared documents at the mediation.

The confidentiality provision in mediations allow parties to talk freely and reach out to each other without fear that it will be used against them.  While the rules of evidence already provide that most settlement negotiations are inadmissible in court, typically mediation confidentiality goes even further.  In the private caucuses, for example, the information can be shared with the mediator on the condition that it not be revealed to the other side. Virtually all mediators rigidly adhere to this in my experience since a breach of such confidentiality could seriously damage a mediator’s reputation.

As a result, we probably won’t learn much about how the NFL mediation is going until it is over.  For all the fans out there, let’s hope this week’s efforts end in a handshake and an agreement instead of a lockout.