Every few weeks, there’s some new story about businesses large and small relocating from California to Texas. So if you’re an executive at one of those companies, welcome to Texas! 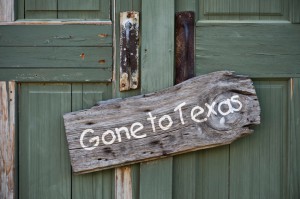 to the movies to get out of this 103 degree heat. Y’all wanta come?”), there’s one other item you might want to put on your to-do list: negotiating the terms of a covenant not to compete.

There’s a decent chance your employer will ask you to sign one, since you now live in a state that, unlike California, actually enforces them. But isn’t Texas a “Right to Work” state? Doesn’t that mean you have the right to work wherever and for whomever you want?

Not necessarily. Under the right circumstances, Texas courts will enforce a non-compete clause that restricts an executive’s ability to make a living. To enforce a non-compete, a court can enter an injunction prohibiting an executive from working in a particular position, performing certain duties or contacting certain customers, or any combination of those activities.

The time to negotiate the least restrictive non-compete possible is on the front end. If you’ve already signed one, however, you’ll want to be intimately familiar with its terms and take them into account before you look for or accept another position.

In general, Texas is more employer-friendly than California, which is one of the reasons (in addition to taxes and low cost of living) many employers cite for relocating here. When considering whether a non-compete is enforceable, courts will consider a couple of factors:

For executives, the first criterion is satisfied because executives typically have access to confidential information, which is the primary type of consideration for a non-compete. Other considerations would include specialized training (and it does have to be specialized) and equity or options in the employer.

When it comes to the “reasonableness” question, there is no bright line determining what is or isn’t reasonable. In general, any restriction more than two years is typically unenforceable, but an executive could argue that even six months is too long if whatever confidential information the executive is privy to would be dated within three months of his departure.

When it comes to geography, again, it’s a case-by-case basis. The central question is “What’s going to cause the company harm?” If, for instance, you were the manager for the Gulf region, you’re probably not going to do your former employer any harm by taking a position in the northeast. But if your responsibilities and confidential information apply nationwide, then a “reasonable” geographic limitation would be considerably bigger.

Needless to say, don’t sign a covenant not to compete – in Texas or any other state – without first consulting a lawyer experienced in that state’s employment laws.

This entry was posted in Executive contracts, Non-Competes and tagged California, corporate relocations, covenant not to compete, Texas. Bookmark the permalink.