In today’s economic environment, investors are looking for safety, stability and, ideally, profitability. The crash of 2008, and news of losses such as the recent $2 billion snafu at JPMorgan Chase & Co., has shareholders jittery and skeptical. So it’s no wonder that a group of unhappy investors in Yahoo! went digging around for dirt on the company’s CEO, Scott Thompson. 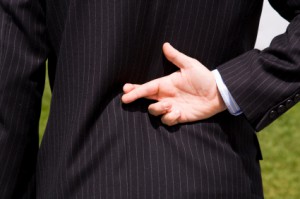 Unfortunately for Thompson, they found it, in a fudged résumé, specifically the listing of a computer science degree he never received. (Thompson says a search firm had inserted the erroneous information years ago and that he neglected to proofread it.)

Plenty of people exaggerate on their résumés, elevating a filing job to “provided critical support to the management team,” or turning a receptionist job into “telecommunications specialist.” But it’s one thing to exaggerate (and don’t get me wrong, I’m not endorsing it), but it’s quite another to list a qualification that one simply doesn’t have.

And there’s another critical difference here: no investor is going to make a decision based on the qualifications and résumé of a mid-level marketing manager. But a CEO’s qualifications are a different matter. That can be a important (or as a securities lawyer would say, “material”) to an investor’s decision.

First, the CEO’s qualifications themselves can influence an investor’s decision. But there’s a bigger issue. Unlike other employees, a CEO’s credibility is critical to a shareholder or potential investor. While it is important to have an honest and credible workforce as a whole, a middle manager’s résumé fraud is not likely to generate much heartache from an investor. But when it’s the person who is leading the earnings call, it’s obviously different.

Put simply, shareholders need to be able to trust what a company’s executive team tells them, whether it’s about the CEO’s health, anticipated earnings, plant closings, litigation—or any of the myriad bits and bytes of information that publicly held companies must disclose.

And fudging on a résumé is like the 13th chime of the clock; it causes you to question everything else. After all, if you can’t trust the management team to be honest with them about the little stuff—their academic degrees, for instance—they are less likely to trust them about the big stuff, such as whether the company has a solid financial footing.

Getting caught lying on one’s résumé is easier today than it’s ever been, and we can probably thank LinkedIn for part of that phenomenon. Most executives—most professionals of any kind—have a LinkedIn profile these days. So anybody hunting around for information about an executive at a publicly traded company can simply view their LinkedIn profile and see if everything on it is verifiable. And if the executive has any other public résumé, they can check for inconsistencies, which are instant red flags.

The Scott Thompson debacle at Yahoo! should serve as a reminder to everyone, from summer interns to CEOs: don’t fudge on your résumé. If you were a receptionist, say so. If you didn’t get a degree, don’t say you did.

To do anything else is painting a target on your back.

This entry was posted in CEOs, Legal. Bookmark the permalink.