Rolling out the welcome (home) mat to Nolan Ryan 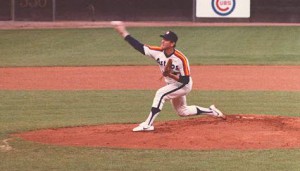 Nolan Ryan pitching for the Astros in Atlanta, 1983

Usually, when an executive says they’re making a move “to spend more time with family,” it’s code for “there’s a lot more to this story than we’re telling you.” But in the case of former Texas Rangers CEO Nolan Ryan’s decision to join the Houston Astros as an “executive adviser,” we can probably take him at his word.

Ryan’s son, Reid, is the team’s president of business operations, so there is a solid family connection with the Astros. Of course, Ryan also pitched for the Astros from 1980-88 and he grew up in nearby Alvin, so we Houstonians consider this a coming home more than anything else.

Ryan, who stepped down as Rangers CEO in October 2013, may be more high profile than most executives, but his move to the Astros resembles similar moves by other, less well-known executives. In such cases, there are likely to be non-disclosure agreements and other assurances of confidentiality, which is a good idea whenever an executive who is privy to confidential information joins a competitor.

Regardless of the circumstances, companies should take steps to ensure that their confidential information – whether that’s recruiting intelligence or customer lists – stays confidential.

For Houston baseball fans, though, this is less about an executive move and more about welcoming home a favorite son. On that front, bringing Ryan back on-board is a smart move that should bring the Astros a lot of good will.

And, frankly, they need it.