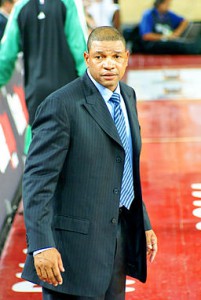 The NBA just approved the trade of Boston Celtics coach Doc Rivers to the Los Angeles Clippers in return for Boston’s getting a first-round draft pick in 2015. This is obviously big news in the basketball world—Rivers is now reported to be the highest-paid coach in the league—but what I found so compelling about this drama was the breathless discussion of Rivers’ non-compete clause.

As a lawyer who represents executives in their employment contracts, non-competes are what I spend a good deal of my time drafting, re-drafting, negotiating and, occasionally, litigating. But it’s rare that I hear much talk of non-competes on ESPN.

Now, Rivers’ non-compete was no ordinary non-compete; there were some significant departures from the norm in his agreement. Two years ago, Rivers signed a 5-year, $35 million (or $7 million a year) contract with the Celtics. With 3 years left on the contract, Rivers was recruited by the Clippers. The snag was Rivers’ non-compete clause, which prevented him from coaching anywhere in the NBA until the end of his contract.

If Rivers were the coach of the Rockets or the Spurs—and his non-compete clause therefore governed by Texas law—it’s not likely that it would have been enforceable, if only because of the timeframe. Of course, under Rivers’ contract, he was being paid $7 million a year for every year of that 5-year contract whether he was coaching or sitting on the sidelines, which is most likely not the case in your run-of-the-mill contact.

However, in Texas, a covenant not to compete must be reasonable in terms of the geographical area, time period, and scope of activity restrained.  What is “reasonable,” of course, depends on what is necessary to protect the legitimate business interests of the employer. Generally, six months, or a year or two at most, is a reasonable time period. And, again, it would depend on circumstances. Also, although legally irrelevant, the fact that the executive is on “garden leave” (being paid to sit out during the non-compete) is probably a helpful fact for the employer with most judges.

But the threshold question is whether Rivers received any confidential information, specialized training or stock options in return for signing such a lengthy non-compete. Clearly specialized training should not be an issue. You wouldn’t think at the head coaching level, a team would pay that much and need to “train” them. And stock options, would rarely, if ever, be an issue. But is there confidential information in basketball? Well, there probably is concerning college prospects because yesterday’s draft sure surprised a lot of us. But that information is stale now, and there is no way that information could be useful for 5 years.

Geography is another issue in the enforceability of a covenant not to compete. Rivers’ contract prevented him from coaching for another team in the NBA. Considering that every NBA team plays every other team—even if it’s only a couple of times a year—it’s not a leap to consider every other NBA team a “competitor.” Granted, they may not all be “competitors” in the truest sense (no offense, Magic and Bobcats fans), but they are all still technically teams that play each other. So the geography in Rivers’ non-compete clause might stand up in Texas.

The final consideration for a non-compete in Texas is the scope of activity. His non-compete simply prevents him from a coaching job, which is probably enforceable. He could be a manager, a scout, or even a player. But not a coach. So he’s not completely shut down.

So it appears that the element of his non-compete that would be the biggest problem in Texas is the duration. Five years (the original length of his contract) would be tough to enforce in any situation in Texas, but under certain circumstances, I would think a court would modify it to one year (or one season).

Of course, it is important to keep in mind we are talking about the validity of the non-compete. Even if the validity of the non-compete were struck down, whether the team still has to pay him if he violates the non-compete (even if invalid) is a separate question in Texas. Under Texas law, if a contract provides that the employer can stop paying you if you compete, then the employer cannot stop you from competing. So you can’t get your cake and eat it, too. But at least it’s your choice. So, it’s still a nice clause to have in a contract, and it’s a good reminder why it’s important to have an experienced lawyer by your side when negotiating an employment agreement—whether it’s an NBA coach’s job or a Chief Operating Officer.

Bottom line: if I were representing Rivers and his contract were bound by Texas law, I would feel pretty good about our chances of getting him out of it.